The conflict between Hindus and Dalits in Punjab may be a new development, but the tensions between the two sides can be traced to changing political economy of religion and electoral politics in the state. 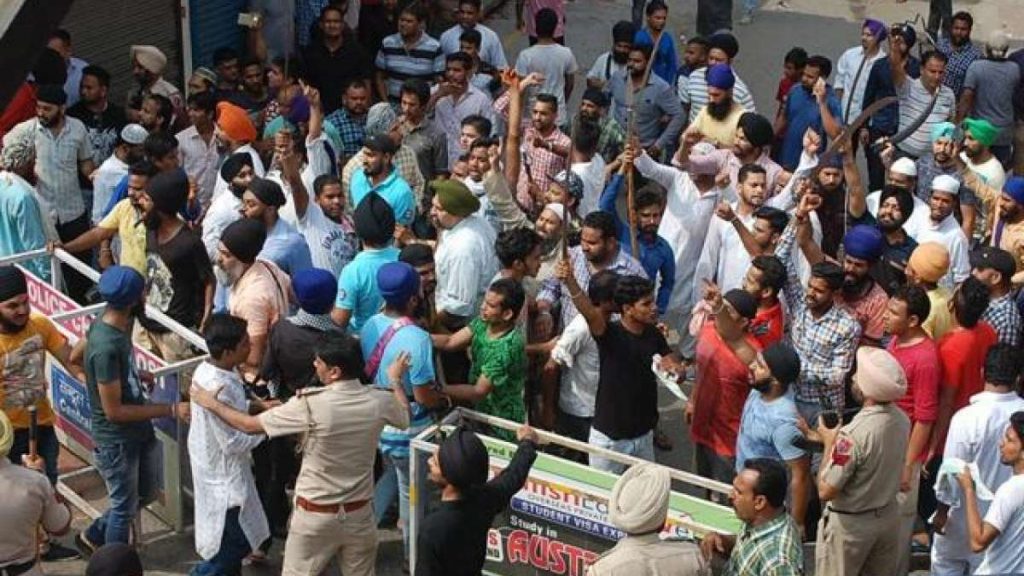 What we have been witnessing in Phagwara and the surrounding areas over the last fortnight or so is the rise of a conflict between Hindu organisations and Dalits – a disturbing new development in Punjab. Credit: Twitter

Chandigarh: In Punjab, Dalit assertion is being displayed in the form of a vibrant movement. From ‘Chamar pop’ to young men mimicking the culture associated with Jat Sikhs, Dalit pride, particularly in the Doaba region comprising the districts of Jalandhar, Phagwara, Nawanshahr and Hoshiarpur, is a carefully-nurtured construct which frequently clashes with Punjab’s dominant Sikh community.

In recent years, clashes have mainly been over economic and social issues or control of religious shrines. Dalit disillusionment with Sikhism, which failed to free them from the indignities of caste, also manifests in their patronage of hundreds of deras and living gurus that dot the Punjab landscape. However, what we have been witnessing in Phagwara and surrounding areas over the last fortnight or so – ever since tensions began in the days leading up to B.R. Ambedkar’s birth anniversary on April 14 – is the rise of a conflict between Hindu organisations and Dalits – a disturbing new development in Punjab.

Des Raj Kali, Dalit writer and activist who has been observing the situation from his base in Jalandhar, the heart of Doaba, shared his worries with The Wire.

“After the rise of Narendra Modi on the national stage, this is the first time that Hindu organisations are seen in conflict with the Dalits in Punjab. So far, the Dalits, particularly of the Doaba region where they are economically well-off, have been at odds with upper-caste Sikhs. But now, religious and caste hatred is on the rise and Hindu organisations are aggressively pursuing agendas which have brought them into conflict with the Dalits,” he says.

He also notes that this new conflict is resulting in a socio-religious realignment wherein radical Sikh organisations and the small number of Muslims there are allying with each other whenever any of them clashes with Hindu groups.

The Phagwara clash occurred over the renaming of a prominent intersection on NH1, which passes through the town. On April 13, activists of the Ambedkar Sena (Mool Niwasi) (ASMN) and a few other Dalit organisations put up a picture of Ambedkar along with a hoarding at the intersection – which was called Gol Chowk – to name it ‘Samvidhan Chowk’, a move which was opposed by factions of the Shiv Sena and other right-wing Hindu groups. This led to a violent clash at midnight in which two persons were injured, one of whom died on April 28 in a Ludhiana hospital.

Tensions between the two sides have been brewing since the beginning of the year, when a violent clash in Bhima Koregaon near Pune in Maharashtra between Dalits and Marathas led to one person’s death and several injuries. The clash occurred during the annual commemoration of a 200-year-old battle which took place between the British and the Marathas. As Dalits and Marathas sought to diminish each other’s role in the historical event, which resulted in the clash, the events were watched with concern and interest in faraway Punjab where Dalit leaders like Suman sensed that the community should assert itself against the increasing provocation of Hindu groups.

Punjab has the highest population of Dalits among all states, at nearly 32%, and most of them are concentrated in the Doaba region. Since 2010, they’ve even had a religion of their own called the Ravidassia dharam after the 15th-century poet-saint of the Bhakti movement.

On January 12, Suman, with the help of his wife, a councillor and others allied to the ASMN, moved a resolution in the Phagwara municipality to name the intersection Samvidhan Chowk. The resolution was kept as pending. Then, on April 2, when Dalits organised the nationwide Bharat Bandh against the Supreme Court’s alleged dilution of the Scheduled Castes and Scheduled Tribes Act, some Hindu groups in Phagwara began to plan a counter-offensive in favour of the Supreme Court ruling, which further incensed the Dalits.

Leaders of several right-wing organisations in Punjab have been given police security due to the targeted killing of leaders, including those from the Rashtriya Swayamsevak Sangh (RSS), in the last few years. The several gunmen that they go around with, and the inevitable brashness which accompanies VIP protectees, has begun to rankle with the Dalits, who see this as an attempt to suppress their own growing social and economic clout. 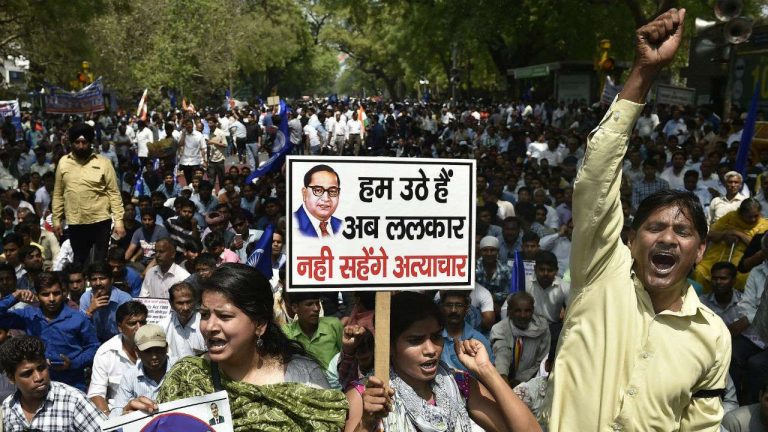 After the Bharat Bandh against the alleged dilution of the SC/ST Act by the Supreme Court, some Hindu groups in Phagwara began to plan a counter-offensive in favour of the ruling, which further incensed the Dalits. Credit: PTI

Professor Ronki Ram, who occupies the Shaheed Bhagat Singh chair in Punjab University, Chandigarh, has closely watched the social and political growth of Dalits in Punjab. He says, “To understand what is happening, we need to recognise the changing nature of the political economy of religion and electoral politics in Punjab. Even though Dalits have the numbers and there is economic and social transformation in their communities, this is not translated into proportional political power. As they strive to snatch a piece of the political cake, they have come up against another force – the right-wing Hindu organisations who are also on the surge and see themselves ruling Punjab without the crutch of a regional party.”

Paramjit Singh Kainth, who started the Chamar pride movement a few years ago with the slogan ‘Garv se kaho, hum Chamar hain,’ alleges that Hindu leaders are being patronised by the police in their common fight against radical Sikh groups, who are allegedly trying to fan communal disturbance and revive Sikh militancy in the state.

In November 2017, the police arrested four persons of a Khalistan separatist module who they said were connected to the targeted killing of leaders of right-wing organisations in the state. The RSS had even lauded Punjab chief minister Amarinder Singh for his success in smashing the terror module. But Kainth and his associates feel that the police security and political clout that they now enjoy has emboldened them to punch above their weight.

“Hindu right-wingers are not many in number but the very fact that they fired in the presence of the police in Phagwara shows that they are assured of protection and are misusing the gunmen given to them.”

Is it any surprise then that among those who stood in support of Dalits in Phagwara is a clutch of radical Sikh groups like the Akal Students federation and Sarv Naujawan Sabha and Muslims? The Jat Sikhs who are usually in the middle of any fight involving Dalits have avoided taking sides. Kali goes to the extent of saying that the tension between Dalits and Hindus is breathing life into the near-dead movement for Khalistan, wherein Dalits will be used as tools by radical Sikh organisations in their fight with the right-wing Hindu organisations.

The bonding of Dalits, radical Sikh organisations and Muslims was also seen in the July 2016 communal clash when members of the Shiv Sena raised slogans against the small Muslim community in Phagwara and forced Muslim shopkeepers to down their shutters. The Muslims responded by taking out a protest demonstration.

A report in The Citizen stated: “In what was certainly unprecedented in Punjab, the protest demonstration organised by the local Muslims was joined by the Sikhs and Dalits of the town. Carrying swords and raising Shiv Sena murdabad slogans the Sikhs came out in large numbers, along with the Dalits, to support the smaller Muslim community that had been feeling cornered for the last several days.”

Chander Suta Dogra is a journalist of two decades standing. She is now a member of the AAP but the views in this piece should not be taken as the views of the party.