After 25 years of broken promises India is counting its Manual Scavangers again.

After 25 years of broken promises India is counting its Manual Scavangers again.

After 25 Years of Broken Promises, India is Counting its Manual Scavengers. Again.

#Grit is a new editorial initiative launched by The Wire will cover and report on manual scavenging and sanitation and their linkages with caste, gender, policy and apathy.

Mainpuri (Uttar Pradesh): At 10:30 am on any other day, the tehsil office in Mainpuri district’s Kishni town is barely waking up. But on April 20, a steady stream of people started pouring into the hall from the early hours. Men and women, from across the district came to register themselves as manual scavengers. And in doing so, forced the government to acknowledge that this practise still very much exists.

About three hours into the self-registration camp, a man walks in. Claiming to be a local reporter, he asks for basic details and then gets on the phone asking the person at the other end to join in.

(Where are you? Come to the block officer. There is some work here).”

Less than 30 minutes later, the said reporter is back, followed by a local BJP leader Prem Shankar Kathuria. Those doing the registration are asked to stop, while the men and women who have to come to identify themselves as manual scavengers are taken outside for a photograph. “It won’t take more than five minutes,” one of the men who came with Kathuria insists.

About 40 people, waiting to register are herded out. The camp volunteers who try to stop the disruption are unheard. Photographs are taken and pamphlets distributed, including a large booklet titled “Ek saal, nai misaal (One year, a new precedent)” – referring to the first year of the Adityanath government. Photographs of Prime Minister Narendra Modi, BJP president Amit Shah and UP chief minister Adityanath smile from the cover. 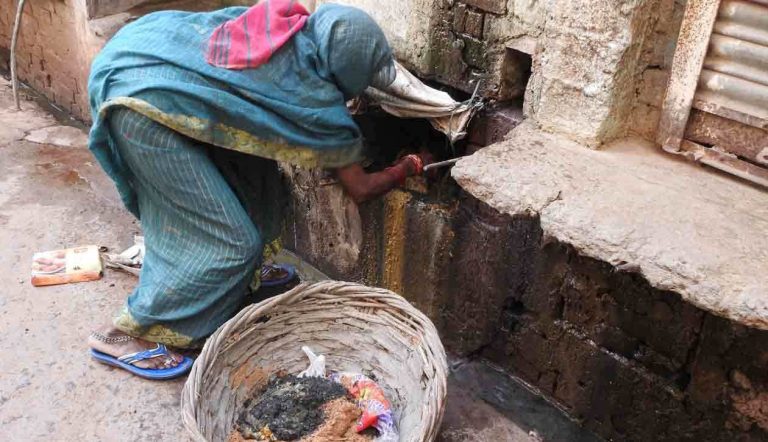 With the enumeration process still on hold, Kathuria addresses the gathering. “Do you know why you are here?” he asks the crowd.

“You are here because our government does not want anyone to do this degrading work anymore. The Adityanath government will keep working to ensure that you do not have to do this work to make money. I am sad that the BJP was not invited here today – next time please invite us, so we can work together. We will make you get enough money so you don’t have to do this work. Woh paisa aap ghar ki taraf lagayie, vikas ki taraf lagayie(Use that money for your home, for progress).”

“We haven’t got anything from the government,” one woman says. She is ignored.

“I’m very happy that this activity will end now. You will all benefit and the Adityanath government will stand by you. The 2019 elections are coming, you should also stand by the government. Make it stronger, and we will take you higher,” Kathuria concludes before rushing out of the hall and into his car. Those carrying out the registration get back to work, promising the people waiting that they will make up for lost time. 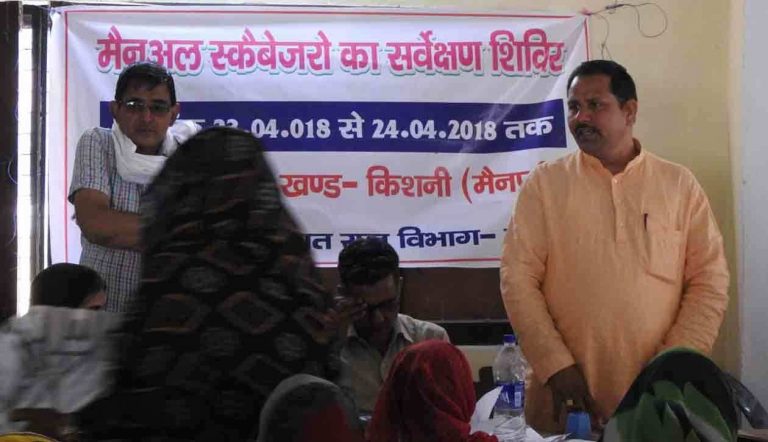 Why is India counting its manual scavengers?

The activity that Kathuria believes will end soon, was first outlawed in 1993. The ban was reiterated in 2013 and rehabilitation measures laid out for those still engaged in the caste-based profession. The first step to outlaw anything – and implement rehabilitation measures – needs a recognition that it exists in the first place. In large parts of the country, that recognition was missing.

After The Prohibition of Employment of Manual Scavengers and Their Rehabilitation Act 2013 came into being, the government recognised 12,742 manual scavengers in 13 states. 82% were in Uttar Pradesh. Activists, politicians and even the Supreme Court have said that this number is a gross under representation, so have the government’s own statistics. According to Census of India 2011, there are 740,078 households across the country where human excreta is removed by a person from a dry latrine. On top of this, there are also septic tanks, sewers, railway platforms from where human excreta is cleaned by people. In addition, the Socio-Economic Caste Census 2011 said that there are 182,505 families in rural India engaged in manual scavenging.

How were these numbers reached at? The district collector was asked to provide it for each district. In most cases, activists say, no survey was done before the collector made up his or her mind that no manual scavengers existed in their jurisdiction.

The Ministry of Social Justice and Empowerment has recognised that the problem exists, and has begun a new survey process, from January 2018, to count India’s manual scavengers. The first phase (currently ongoing) involves counting those who clean night soil (buckets and cesspools in which excreta is collected overnight) and pit latrines in 164 districts across five states. The second phase will look at people who clean septic tanks, sewers and railway tracks. The survey is expected to include those still engaged in the profession, as well as those who left it after 2013. 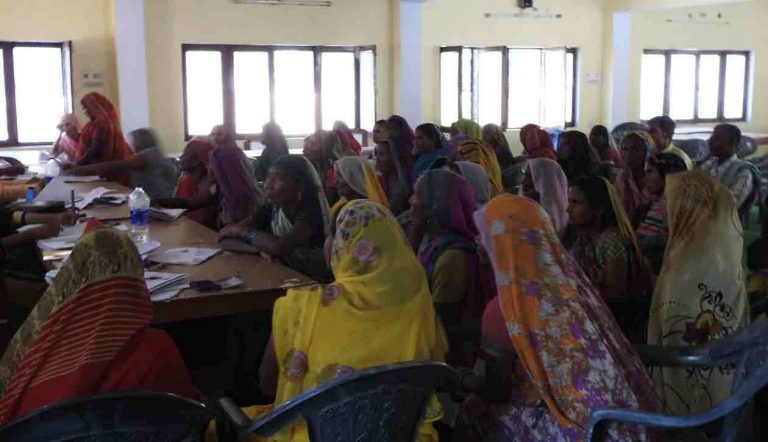 ‘I am a manual scavenger’

Under the process, each district is required to host a minimum of three self-declaration camps. The one in Kishni was the fourth one in Mainpuri, as organisers said they wanted to make it easier for all concerned to make it. People were told about the camps through newspaper ads, pamphlets and a village-to-village campaign. Transportation to and from the centre had also been organised.

Documents were necessary to authenticate identity. The person claiming to be a manual scavenger was required to carry a passport size photograph, photocopy of bank passbook, Aadhaar card, a declaration from either an employer or a self-declaration stating that he/she is/was a manual scavenger. Once the documents were verified, a form was filled with their photographs and details on whether they were still engaged in the practise and how many latrines they cleaned per day. Once the form is complete, the person concerned places their thumbprint or signature on it (it was a thumbprint in all the forms this reporter saw being filled).

At one end of the hall, five people are sitting around a long table filling in people’s forms for them – three from Jan Sahas, an organisation campaigning for the eradication of manual scavenging, and two from the local government. Kumari Nilesh is the block co-ordinator of the Swachh Bharat Mission, but says has little experience working with manual scavengers. She is taken by surprise when the first woman she speaks to says she is not paid in cash. 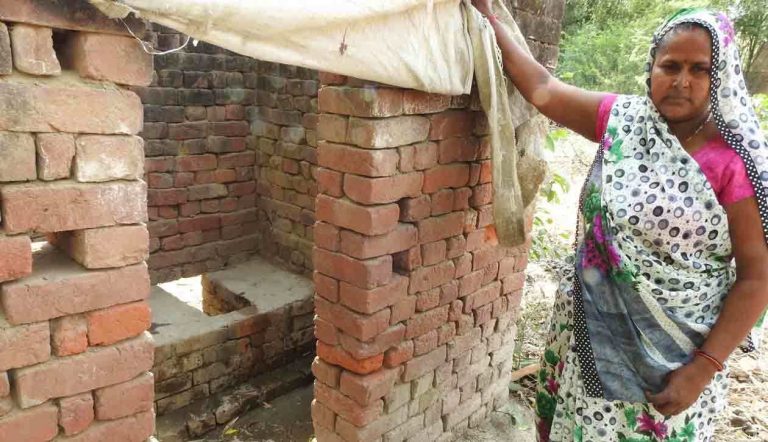 Laali next to a latrine she cleans in Birtiya village. Credit: Jahnavi Sen

Dry toilets: 95% of those who clean them are women

An overwhelming majority of those waiting for their turn at the self-declaration camp are women. “In UP, I would say 98% of those who are engaged in this kind of manual scavenging (cleaning household dry latrines etc) are women,” Sanjay Dumane of Jan Sahas told The Wire.

“When people think of manual scavengers they usually have an image of a man inside a septic tank, so these women are even more ignored than their male counterparts. Nobody thinks that the woman who comes to clean their toilet in the morning is a manual scavenger, there’s no recognition that this is banned or wrong. There’s also no government will to break the caste system.”

When asked how much they’re paid, the answer is quite uniform. “Two rotis a day, and some grain every six months or so,” Laali from Birtiya village tells The Wire. Six women from Laali’s family, from the Valmiki community, are now the only manual scavengers in Birtiya. “We clean the latrines in the morning, and then work as agricultural labourers in the day, along with the men.” In the towns, the payment is in cash – anything between Rs 40 and Rs 90 per month, depending on how many people use the latrine.

Half way through the day it is clear the “extra” camp day is not going to be enough. Forms are running short. Someone is sent out to get photocopies. Though they are yet to get the final count – which will be done by the Ministry of Social Justice and Empowerment once all the forms have been sent to them – the activists said they have registered close to 600 manual scavengers in Mainpuri alone. That’s only one of Uttar Pradesh’s 75 districts.

“We just hope that names are not cancelled out on some sort of technicalities. But I guess we’ll have to wait and see,” Dumane says.

#Grit, where this story first appeared, is a new initiative of The Wire dedicated to the coverage of manual scavenging and sanitation and their linkages with caste, gender, policy and apathy.. The Manual Scavenging Project is the first in a series of deep dive editorial projects.