You Are Born to Clean Filth, Don't Ask for Money,' Dalit Killed in Rajkot Was Told

Thirty-five-year-old Mukesh Vaniya was recently flogged to death over allegations of stealing iron scrap from a factory. Police have so far arrested five people, including a minor.

Limdi (Gujarat): A 25-km-long muddy and dusty trail running through the dry fields of Surendranagar district’s Limdi tehsil in Gujarat leads to the village of Parnala. Nearly 40 Dalit families live on the outskirts of this village, which is not accessible by a concrete road. The area also houses the single-room home of Mukesh Vania, a Dalit, whose family of five has been living there for years. Over time, the family has managed to get an electricity connection, but water supply still remains a distant dream.

In the summers, when the fields dry up and water scarcity hits farmers, many agrarian labourers do not find work and travel to cities to earn a livelihood. Recently, 35-year-old Mukesh became one of those labourers, travelling 130 km to reach Shapar in Rajkot district. The district is one of the many Gujarat Industrial Development Corporation (GIDC) hubs across the state. 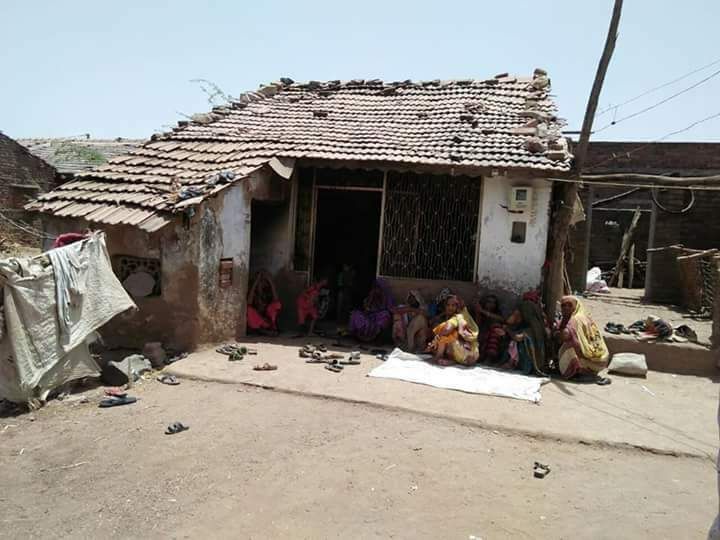 Desperate to earn some money, Mukesh and his wife took to picking up scraps. It had been only four days since the couple had arrived in Shapar when the family was dealt a severe blow. At around 6 am on May 20, Mukesh was tied to a pole and flogged till his liver failed. His wife Jaya and aunt Savita were thrashed with a belt for trying to rescue Mukesh.

“While we were picking up scrap, five men (the accused) called me first to pick up and clean filth near the factory, which I refused to do for free. Then one of the men caught my hand. When my husband protested, they asked our caste, knowing that we were Dalits. They (the accused) hurled casteist abuses and said we were Dalits (so) we are supposed to clean filth and we will clean whatever we were asked to clean,” says 32-year-old Jaya, Mukesh’s wife.

“They started hitting my husband and when I protested, they hit me with a belt. I ran and called aunt Savita, they hit her too. They chased us away and tied him to a pole. They kept hitting him till he died,” Jaya pauses for a while, then adds, “We had just been in Shapar for four days when this happened.”

Mukesh was unconscious by the time Jaya and Savita returned with more people to rescue him. He was later rushed to Rajkot’s Civil Hospital – where he was declared dead. An FIR was lodged with the Shapar police station by the afternoon of May 20.

PSI Ramesh Sindhu was the first respondent at the spot and the case was later handed over to D.M. Chauhan, the deputy superintendent of police of Gondal Rural police station in Rajkot. Police have so far arrested five people, including a minor.

Screenshot from the video shared on Twitter. Credit: Twitter/Jigensh Mevani

“Radadiya Industries manufactures cast iron. They buy iron scraps kept outside the main factory. It’s not a new thing for labourers, scrap pickers and ragpickers to steal scraps in this area. That day we got a call from the factory of Radadiya Industries telling us they had spotted on CCTV somebody stealing the iron scrap. Police asked them to wait until they sent some of their personnel to the spot. Instead, they (owners and others) came out and confronted the victim who was found stealing iron scrap from the premises of Radadiya Industries. They took the victim to another factory they own, tied him up and thrashed him. As per the post-mortem report, the victim died of injury in the liver due to the assault,” Chauhan told The Wire.

“Three of the accused – Chirag Vittalbhai Vora, Divyesh Kishorebhai Vora and Jaisukh Devraj Radadiya – are owners of the factory where the victim was tied. Tejas Mansukhbhai Zala, the fourth accused, is an employee at the factory and the fifth accused is a minor who used to work at a tea stall near the factory. The man seen holding the belt around the victim’s neck in the video that went viral post the incident is Jaisukh Devraj Radadiya, who is the main owner of the Radadiya Industries and the man seen hitting the victim in the video is the minor. All the accused have been booked under IPC 302, 114, 323, 143, 147, 148, 149 and 354, Prevention of Atrocity Act 3(1) (R) (S), 3(2)(5) and under Gujarat Police Act’s Section 37 (1) and Section 135,” added Chauhan, the investigating officer on the case. 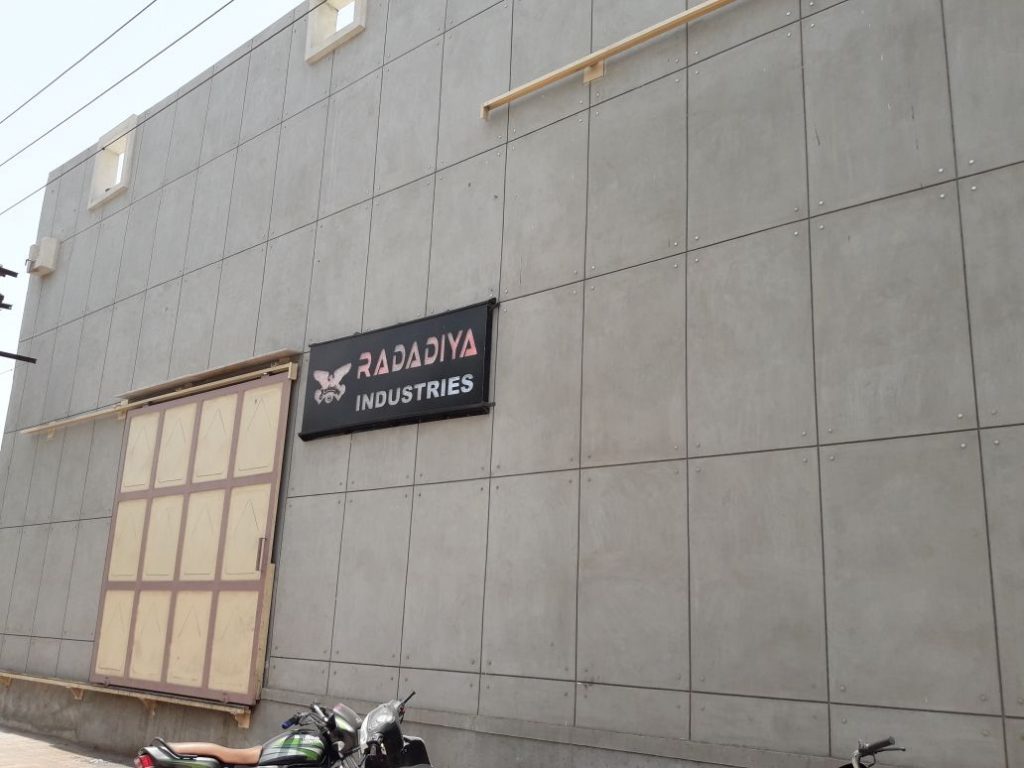 The premises of Radadiya industries where Mukesh Vania was killed. Credit: Damayantee Dhar

Following the incident, the Gujarat government on May 21 announced a Rs 8.25 lakh compensation for the family. Later, on May 22, Gujarat Pradesh Congress Committee too donated Rs 1 lakh to Mukesh’s family.

“Parnala is a remote village in Limdi taluka. On entering the village it becomes clear why a villager would need to travel 130 kilometres to get a job. The only work the village offers is that of agrarian labour in fields owned by rich farmers, most of whom are Patels or Kolis by caste. Every summer they travel to GIDCs after losing their field jobs. They are ready to take any job they can get. Usually, if one is lucky, one gets a job in a factory where working for about 12-14 hours fetches Rs 300 a day. Mukesh Vania wasn’t so lucky, he started picking scrap like his relatives who had come to Shapar before him,” says D.D. Solanki, president of Bhim Yuva Sangh, a Dalit organisation based in Rajkot.

“First he lost his job and then his life,” adds Solanki.

Mukesh, the eldest son of the family, is survived by his wife Jaya, two children – an eight-year-old and a six-year-old – and his mother. Mukesh’s earning wasn’t enough to sustain his family. Therefore, his wife Jaya had to come with him to Shapar.

“In our village Parnala, an agricultural labourer’s job is the only option we have, fetching a meagre Rs 100. That too if you toil the whole day. When I got married, I moved to Ahmedabad and started working as a labourer in a construction company. I earn Rs 300 a day, which isn’t enough for paying the rent and feeding my family. Mostly, I have to borrow money on interest to pay my rent. Sometimes, when I manage to earn more, I pay off part of a loan. My brother managed his family with whatever little he earned working as a labourer. My sister-in-law suffers from acute and chronic breathing trouble. Her medicines cost more than Rs 5,000 per month. My brother couldn’t afford that, so he bought only half the medicine each month to keep her alive,” says Prakash Vania, Mukesh’s younger brother. 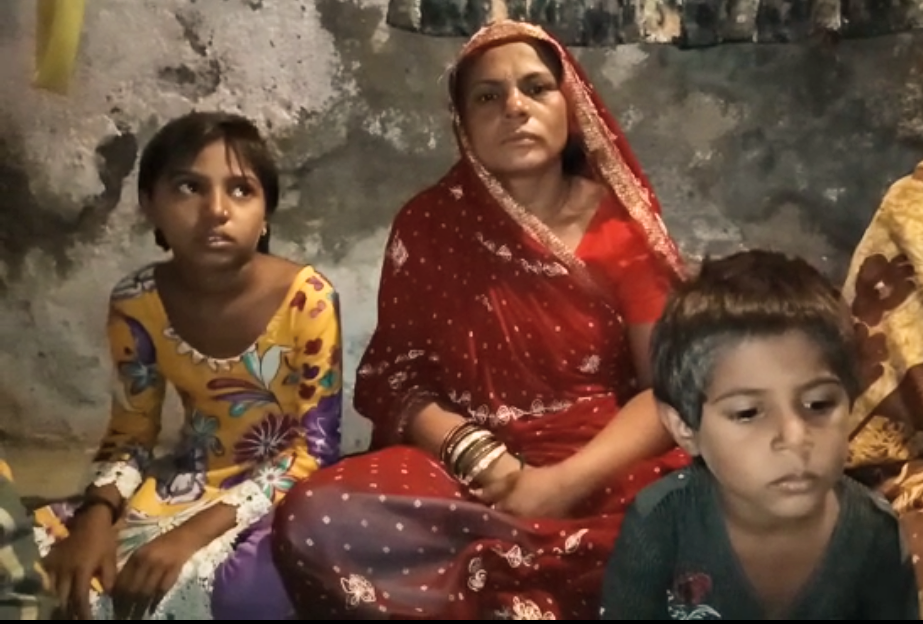 “They are accusing my brother of theft. If my brother has stolen something why didn’t they wait for the police? They not only beat my brother to death but also happily filmed it. Police came and took my sister-in-law’s statement in a hurry – when she was too shocked to say anything. When my brother said he will charge Rs 150 to clean the filth, they asked about his caste.”

“Knowing he was a Dalit, they hurled casteist abuses at him. They taunted my brother and said why ask for money to do a job that he was born to do. Then they held Jaya’s hand and pulled her blouse. They told her that she is good looking and that she should drop in later to earn whatever amount she wants. She screamed and ran for help but by the time she came back, it was too late. My sister-in-law has lost her only support. She is injured and still in shock, she has two kids to take care of and no job.”

“We may be considered lowest in the social hierarchy, but nobody has the right to disrespect our women. Our women should be treated with dignity. But police won’t pursue this case, will they?” asks Prakash