The numbers don’t add up

FROM THE READER'S EDITOR | READERS' EDITOR

The numbers don’t add up 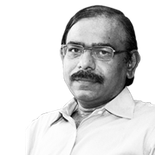 One of the ways to learn new tools for credible investigative journalism is to read the scholarly reflections in the opinion pages of this newspaper. For a generation of journalists who came into this profession before the spread of journalism schools, one way was to scan for methodologies deployed by economists and statisticians, and then dig into the mass of published data to uncover the truth. Journalism textbooks tell us that the role of journalism is not only about finding and reporting facts, but also the truth about facts. Journalist Bill Kovach and author Tom Rosenstiel have repeatedly said that verification is what differentiates journalism from other forms of communication. Reliable data have been the bedrock for verification.

A challenge for data journalists

A recent lead article, “The paradox of job growth” (July 5, 2018), by R. Nagaraj, who works for the Indira Gandhi Institute of Development Research in Mumbai, shows that this method is also under severe strain. It underlines the difficulties of data journalists in India. India is a country of paradoxes. The Constitution guarantees fundamental rights and ensures separation of powers of various estates of the state. Legislation like the Right to Information Act is supposed to empower people to access information without being subjected to opaque bureaucracy and obsolete laws. However, it seems that the state machinery has become sloppy in producing, collating and processing data. As the country is celebrating the 125th anniversary of Prasanta Chandra Mahalanobis, the founder of the Indian Statistical Institute, the irony of not of having a Chief Statistician for nearly six months is disturbing.

Two statements by Prime Minister Narendra Modi underpin the crisis in general, and as a corollary, its impact on journalism. In a recent interview to Swarajya magazine, he said that the state of the economy in 2014 was much worse than expected and even the Budget figures were suspicious. He asserted that a White Paper on the state of economy at that stage would not have been a “mollifier” but a “multiplier of the distress”. About the lack of jobs, Mr. Modi said that the issue was more to do with a lack of data on jobs, and said that “our traditional matrix of measuring jobs is simply not good enough to measure new jobs in the new economy of New India.”

Professor Nagaraj asks, “Are the latest employment estimates by the Central Statistics Office (CSO) factually correct?” He finds them to be off the mark and confined to the economy’s organised sector, accounting at best for 15% of the workforce. He says there is probably no paradox in high output growth rates and the marginal effect on employment if one acknowledges that GDP estimates (after the latest revision a few years ago) have “apparently overstated domestic output growth on account of the infirmities in the methods applied and datasets used”.

On cursory reading, it may look like Mr. Nagaraj and Mr. Modi are on the same page. But a closer reading reveals that the economist pushes us to examine the numbers given by the government with caution and scepticism. In my earlier columns, “Making sense of metadata” (August 29, 2015) and “The data conundrum” (May 21, 2018), I argued for the centrality of context in interpreting data. Now it is clear that the term context with reference to government-generated data should first explain the changes in the methodologies and parameters used by the state agencies to put the numbers together. It is now impossible to compare some of the old data, including the Budget figures, with the new data to arrive at any meaningful conclusion. The creation of NITI Aayog and the abolition of plan expenditure posed a huge challenge to a meaningful comparison of the allocation of funds for various sectors as there are no corresponding figures with the same parameters.

Many economists see that the numbers flowing from the new methodology deployed by the CSO are no longer illuminating but misleading. The data conundrum is not restricted to the CSO alone but extends to other economic wings of the government. We need a new investigative series to look at how numbers are computed and what it really means to the people of India.