Labour must be allowed to share in India’s economic succes story for reasons both political and moral.

On Wednesday, an enormous protest march organised by Left groups saw more than 1.5 lakh people coming out on the streets of Delhi to demand measures to end the economic distress of farmers and workers. These include loan waivers for farmers, a higher minimum support price for crops, better implementation of labour laws and the establishment of a minimum wage of Rs 18,000 per month.

For the past three decades, India’s has been an economic success story. Yet, the demand for a reasonable minimum wage points to the fact that this success has been unevenly distributed. As Scroll.in reported in 2016, even the workers responsible for India’s economic growth have received little benefit from it. An analysis by Economists CP Chandrasekhar and Jayati Ghosh shows that while corporate profits have increased continously, wage payments, as a percentage of value added in organised manufacturing, have actually fallen for the past three decades. Not only is Indian labour losing out compared to its own past, it is badly off when benchmarked with other countries. In 2009-’10, wages accounted for only 11.9% of value added in organised manufacturing, one of the lowest figures anywhere in the wo 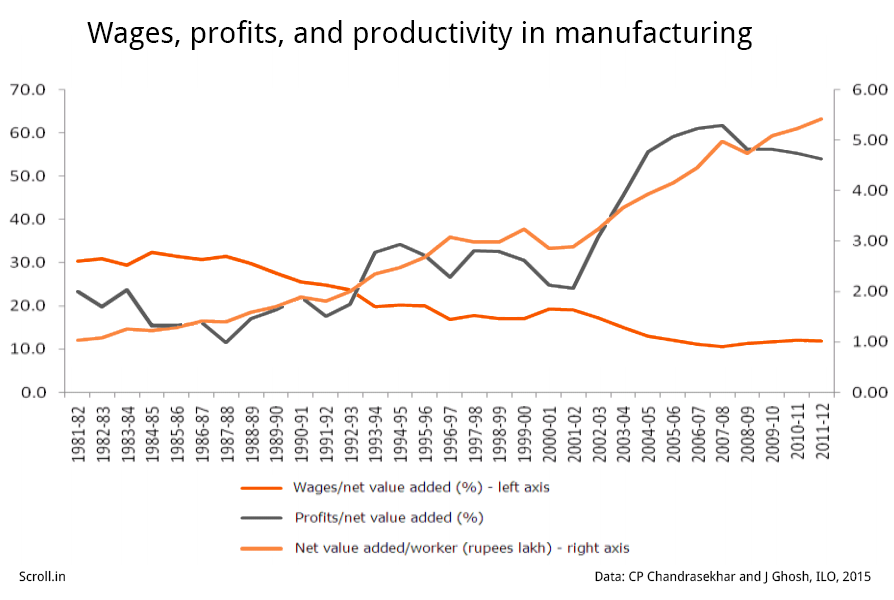 India’s national floor minimum wage is only suggestive and not legally binding. The rate has currently been fixed at Rs 176 a day, which would work out to Rs 5,456 for anyone who worked 31 days a month. Moreover, while this minimum wage is fixed as per a formula that takes into account factors such as recommended daily calory intake, a new bill in parliament seeks to undo even that, allowing the Union and state governments to arbitrarily set wages. However, the Union government itself has set a minimum wage of Rs 18,000 for its own employees – which is the figure workers are asking to be set as a minimum wage for all labour throughout the country.

Setting a fair minimum wage and ensuring its compliance is especially critical given that not only have wages stagnated, India has no state safety net to speak of. Wages are all a worker has.

There are compelling political and moral arguments to allow India’s workers a share in the country’s economic success. Even as a minimum wage obviously improves the lives of workers, studies show that increasing wages has little effect on increasing unemployment rates. Indeed, the idea that a floor for wages should be set in order to prevent workers from bein exploited ihas near-universal acceptability across the globe. Countries as disparate as the United States and China have various types of legally mandated minimum wages. With agrarian distress pushing more people towards urban employment, it is crucial for the Union government to take care of labour in India’s cities and towns.