A nexus of apathetic and allegedly corrupt labour officials, builders and trade unions leave workers struggling to get benefits they are legally entitled to. Gangiya Devi has worked as a construction worker in Delhi for 15 years. In 2016, she decided to get her labour identity card after a middleman said it would help her avail of a range of welfare benefits, including maternity allowance, scholarships for children and old age pension. She paid the middleman Rs 500 and he promised to deliver the card within three months. “I have not heard from him in two years,” said Devi, 35, a single mother to four children.

The same middleman also cheated another construction worker, Reena Devi Pasman, 25. “In my family, I was the first to try and get an identity card,” she said. “We are not educated. Whatever they tell us, we believe them. But why do they take our money?”

The Workers Act states that every registered beneficiary is entitled to welfare benefits such as financial and medical assistance in case of an accident, old age pension, loans, scholarships for children, maternity benefits. The registration fee must not exceed Rs 50.

The Welfare Cess Act requires the builder of any project worth over Rs 10 lakh to pay a cess of not less than 1% of the construction cost to the state’s Labour Welfare Board. The board must then disburse this money to construction workers and their families.

In Shalimar Bagh, however, the audit found that of the 2,493 registered beneficiaries, just 109 had seen their claims settled and only 800 had received scholarships for their children. It also found that 339 workers were awaiting registration or renewal of labour cards; 138 workers had paid registration fees to trade unions but had not received their cards; 97 eligible workers had not been registered at all.

“It is a total mess of the implementation of the law,” said Nikhil Dey of the Mazdoor Kisan Shakti Sanghathan, which has worked extensively on the National Rural Employment Guarantee Act and the Right to Information Act. “This shows how vulnerable people are, that too in the national Capital. The social audit goes into the life cycle of the programme. It checks the immediate implementation and the policy implication.”

Delhi’s Labour Minister Gopal Rai and Special Labour Commissioner A Nedunchezhiyan both claimed they were “not aware” of the social audit and refused to comment on its findings. 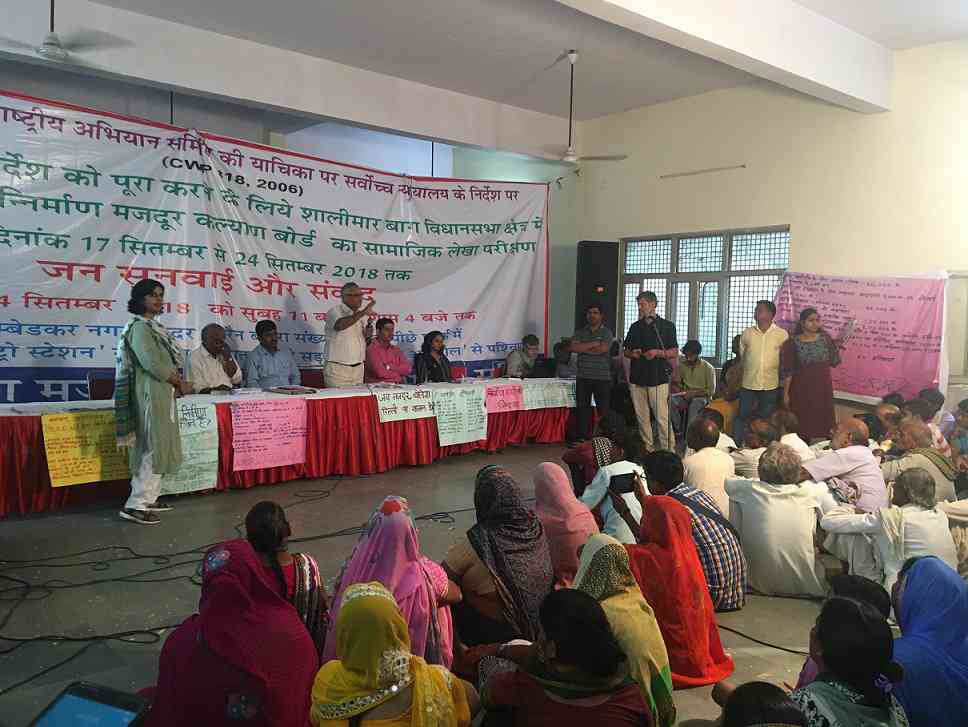 Construction workers air their grievances at a public hearing organised as part of the social audit in Shalimar Bagh, Delhi.

Apart from Delhi, a social audit was conducted on a pilot basis in Salumbar in Rajasthan’s Udaipur district. The audits were done after the Supreme Court in May directed the Union Ministry of Labour and Employment, state governments and Union territories to ensure effective implementation of the twin laws. The order came on a petition filed in 2006 by the National Campaign Committee for Central Legislation on Construction Labour, drawing attention to government failure to implement the laws.

The court noted that labour boards had collected over Rs 37,400 crore under the Cess Act until July 2017, but disbursed only around Rs 9,500 crore. The Delhi Buildings and Other Construction Workers Welfare Board, for one, had spent just 6% of the Rs 2,548 crore collected in 2016 and 2017.

For construction workers in both Delhi and Rajasthan, the audits found, the most common grievance was about the difficulty in getting labour cards. A worker can obtain the card in three ways, said Subhash Bhatnagar, coordinator of the National Campaign Committee for Central Legislation on Construction Labour. One, they can approach their employer for a certificate to submit to the state labour welfare board after completing 90 days of work. Two, they can approach the board directly. Three, they can register through a trade union.

“The problem is that of corruption,” alleged Bhatnagar. “There is a nexus between corrupt labour officials and trade unions. The unions also charge whatever fee they want for registration. So most workers get their cards made through middlemen, who are also corrupt.”

Ram Prasad, 39, has been a construction worker for 20 years but it was not until 2015 that he obtained his labour card. “A teacher at my daughter’s school told me about it,” he said.

Prasad needs to renew his card but he claimed the board has been turning him away saying the renewal work has stopped five months ago.

“This is where it begins,” remarked Dey. “The awareness levels of people are so poor, and these are residents of Delhi who have been here for years. This is the state of the National Capital.”

The workers also struggle to get scholarships for their children, the Delhi audit found. Mohammad Ispak said his children have not received scholarships for two years. “We submitted the forms, but they were rejected,” he said. “They say government gives money for us but we don’t get anything. Poor people’s children need to go to school but there is no support. We have to buy textbooks, shoes and uniforms on our own.”

The social audit identified 54 buildings in Shalimar Bagh which had not paid the cess because they were not registered with the labour board. It had only registered three structures in the area. “Nobody really looks into this,” complained Dey. “Government construction in Delhi is huge and that is automatically registered by the board. But everywhere else, in colonies, there is constant construction and renovation. One way would be to make Resident Welfare Associations responsible to report construction in their areas to the board.”

In its May order, the Supreme Court had told government authorities to strengthen the machinery for registering buildings and collecting cess from private builders. It had also directed the labour ministry to frame a “model scheme” before September 30 for the benefit of construction workers that would address matters of their social security, old age pension, healthcare, and the education of their children. The social audit shows the authorities have not done enough to enforce the order.