It will greatly bring down the poverty reduction impact of the programme, harm the construction of much-needed rural infrastructure and dramatically diminish the labourers’ bargaining power vis-à-vis the farmers. Using the MGNREGA to pay for labourers’ wages would not increase much the availability of workers willing to work in the fields. Credit: Reuters/Desmond Boylan

At the recent fourth governing council meeting of the NITI Aayog, the government announced the formation of a sub-group of chief ministers to propose ways of linking the Mahatma Gandhi National Rural Employment Guarantee Act (MGNREGA) with agricultural activities.

The formation of the committee came in the context of discussions on how to double farmers’ income by 2022, a bold (and highly unrealistic) electoral promise of the BJP in 2014.

It is not very clear what the government is proposing, but by looking at the ‘tentative’ terms of reference of the sub-group it seems that the real issue at stake is to allow state governments to use MGNREGA funds to subsidise the wages of agricultural labourers working on the private land of farmers.

This would, on the one hand, turn the MGNREGA from a rather successful anti-poverty programme that has contributed significantly to empower the most marginalised sections on India’s society into a scheme aiming at restoring highly unbalanced power relations in favour of large farmers (often belonging to the locally dominant castes).

On the other hand, it would not solve or even contribute in any significant way to reduce farmers’ distress.

It is worth looking at the list of issues that the sub-group will analyse point by point.

First, the committee will “suggest a wider choice of state-specific interventions both for pre-sowing and post-harvest to further improve the thrust on incomes, water conservation and waste to wealth”.

Second, the sub-group will propose ways ‘to align works under MGNREGA fully to the requirements of achieving the goal of doubling farmers’ income by 2022. This will improve thrust on water conservation, individual beneficiary schemes, construction of rural haats, vermi-composting etc.’

Both these measures seem to be little more than expanding the list of permissible works under the programme. In fact, according to Schedule I of the MGNREGA, district coordinators must ensure that at least 60% of the works taken up under the programme must create productive assets ‘directly linked to agriculture and allied activities’.

It is thus not clear why a sub-group of chief ministers is needed to amend the list of works that can be executed under the programme, as most of them must be linked to agriculture anyway

It is similarly unclear why chief ministers should use their time – in an election year – ‘to explore the possibilities of MGNREGA as a livelihood resource for development and diversification of livelihoods of small and marginal farmers specially belonging to SC/ST households’.

Again, in many states, it is already possible to utilise MGNREGA funds to develop the land of marginal farmers belonging to SCs and STs. While additional ways to increase the productivity of marginal farmers would certainly be welcome, this could be left to the state governments to decide, as it is currently the case.

The real task in front of the sub-group seems to be formulation of “recommendations on interventions of MGNREGA that can facilitate reduction of agrarian distress including work availability, wage rates, seasonality etc.”.

In his remarks, NITI Aayog vice-chairman Rajiv Kumar noted: “The committee would examine the feasibility of using the employment generated under the Mahatma Gandhi National Rural Employment Guarantee Act in agriculture-related activities both pre-harvest and post-harvest” 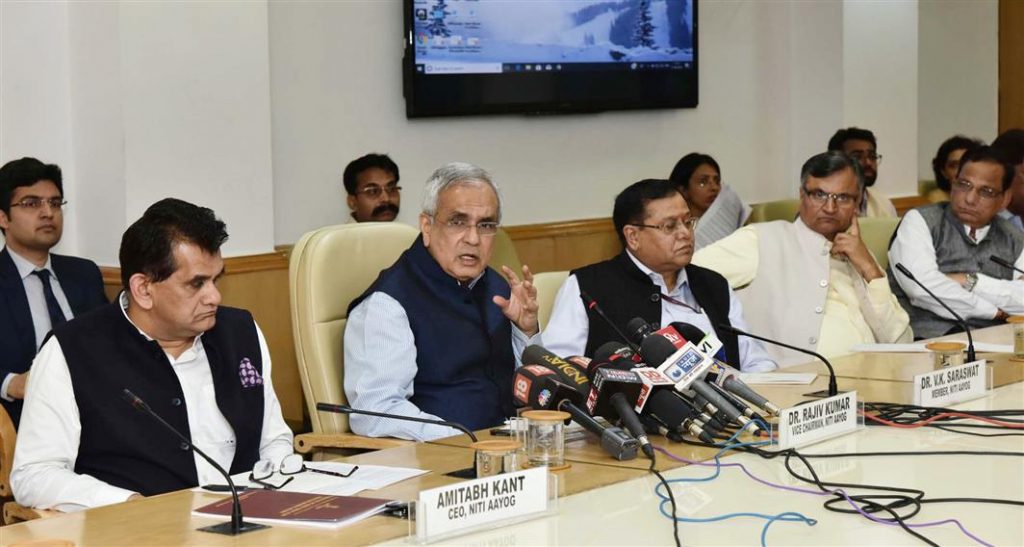 In other words, it seems that the government has finally capitulated in front of a long-standing demand of farmers’ representatives, namely to use MGNREGA funds to subsidise the wages of agricultural labourers employed on the private land of farmers.

This is a recipe for disaster.